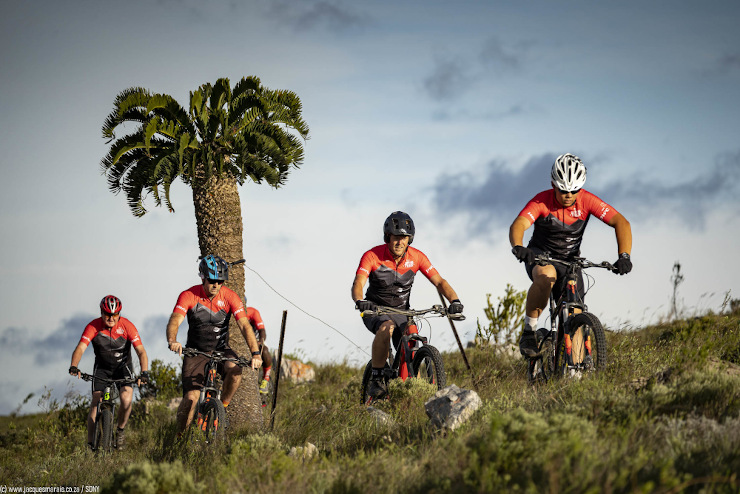 An event such as the Rubicon Great Zuurberg Trek E-edition is the perfect platform to demonstrate the versatility of one of cycling’s fast-growing sectors.

“The growth of the e-bike has been phenomenal,” said Giant Bicycles marketing manager Max Sullivan, “and we expect this sector will continue to grow, particularly since e-bikes are in their infancy compared to the acoustic bicycle.”

The inaugural mountain bike event for e-bikes – believed to be a first of its kind in South Africa – takes place at the Zuurberg Mountain Village at Addo, near Gqeberha, from Friday to Sunday.

It follows closely on last weekend’s Great Zuurberg Trek, the race that inspired the E-edition, and Sullivan will be in the field alongside Gqeberha’s Marco Joubert.

The latter, a professional with the Imbuko-Giant Pro Cycling team, will be riding his acoustic Anthem to level the playing fields – an element introduced by the organisers to allow riders to participate with weaker teammates without compromising their own experience.

Sullivan felt the emergence of e-biking had opened the sport to a much wider audience.

“There is definitely a place for an e-bike event of this nature because so many more people, who may not be quite as fit as regular competitors, can get to see the same views, ride up the same mountains and complete the same event as the more experienced riders,” he said.

“At the same time there is a class of e-bikes that are incredibly capable, allowing experienced riders to go faster up and downhill, with more ease and more fun.”

“We believe that post this inaugural event we will experience exceptional growth to the extent that we will be fully subscribed within a year or two,” he said.

“We saw that kind of growth with the GZT, despite there being many ‘normal’ events on offer, so with fewer e-bike options we believe we will grow aggressively.

“Our research shows that some folk who used to ride three-day events regularly have stopped because of age, health or an inability to put in the training. E-bikes are bringing them back into the three-stage arena.”

He added that the focus on “being a ride rather than a race” was one of its key selling points.

“This has created a situation where stronger riders can partner with less able riders, for example a parent with their younger and fitter child, or spouses, where one is on a normal mountain bike.

“We have reduced the ascent and distance to cater for e-bikes and slightly less fit participants,” explained Hayter.

“By doing this we are affording those riders who might feel the sister GZT is a bit too challenging to experience these diverse and fun trails.”

Kelly Scott, head of marketing and communications of the Rubicon Group, said the GZT-E encompassed many of the company’s principles.

“Rubicon is at the forefront of sustainable technology in South Africa,” she said.

“We believe that technology isn’t just useful in our day to day lives – it can also have a fun component. The GZT-E is exactly that!

She said Rubicon echoed Tesla’s mission statement of accelerating the world’s transition to a sustainable future.

“E-mobility, whether it be e-bicycles or other forms of electric vehicles, promotes that ideology, hence our proud involvement in this event.”

She added that their in-house developed Power Rig would be at the Zuurberg Mountain Village this weekend.

“This unit has been developed as a standalone, off-grid, e-bike charging station that can charge an impressive 25 e-bikes per session.”

Sullivan said a team from Rubicon would be testing out their fleet of demo bikes, so they were looking forward to “seeing the smiles on their faces out on the route”.

Driving sustainability was a very exciting space to be in, he said.

“For us it is about connecting with and supporting the industry in which we operate. And hey, at the end of the day, we like riding bikes too!

“The uniqueness of this event really caught our eye, being the first stage race revolving around e-bikes and in such an amazing location. We just had to get involved.”

We use cookies on our website to give you the most relevant experience by remembering your preferences and repeat visits. By clicking “Accept”, you consent to the use of ALL the cookies.
.
Cookie SettingsAccept
Manage consent

This website uses cookies to improve your experience while you navigate through the website. Out of these, the cookies that are categorized as necessary are stored on your browser as they are essential for the working of basic functionalities of the website. We also use third-party cookies that help us analyze and understand how you use this website. These cookies will be stored in your browser only with your consent. You also have the option to opt-out of these cookies. But opting out of some of these cookies may affect your browsing experience.
Necessary Always Enabled

Performance cookies are used to understand and analyze the key performance indexes of the website which helps in delivering a better user experience for the visitors.

Analytical cookies are used to understand how visitors interact with the website. These cookies help provide information on metrics the number of visitors, bounce rate, traffic source, etc.

Advertisement cookies are used to provide visitors with relevant ads and marketing campaigns. These cookies track visitors across websites and collect information to provide customized ads.

Other uncategorized cookies are those that are being analyzed and have not been classified into a category as yet.